Birdlife of the region

The Birdlife of Northeast Greenland

The high arctic northern part of Greenland is in many ways an extreme region. The harshness of the country is reflected in the bird life of the area. Few bird species are adapted to cope with this extreme environment and, compared with more southern latitudes, only a very small number of bird species breed here.
A visit to the area during the Summer will certainly yield observations of the charming Snow Bunting (Plectrophenax nivalis), a passerine species that is distributed everywhere along the east coast of Greenland, even in the most northerly parts. Visitors to sheltered areas with more vegetation (e.g. the interior parts of the Scoresby Sund region) may also discover Common Redpoll (Carduelis flammea), Arctic Redpoll (C. hornemanni), and Lapland Longspur (Calcarius lapponicus). The Northern Wheatear (Oenanthe oenanthe) may also be seen, but is a rare breeder typically found at rocky sites.
As a consequence of the long, hard Winter, virtually all the breeding bird species of Northeast Greenland leave the area; only the Raven (Corvus corax) and the Rock Ptarmigan (Lagopus mutus) spend the Winter in the area.

North-East Greenland holds many sites of international importance for geese, not only as breeding sites but also as areas where non-breeding geese spend the summer to moult their flight feathers with minimal disturbance from potential predators. The relatively luxuriant (by high arctic standards) valleys and lowlands of Jameson Land, Hochstetter Forland, and Germania Land are examples of sites where thousands of Pink-footed Goose (Anser brachyrhynchus) and Barnacle Goose (Branta leucopsis) spend the summer, while the rare light-bellied Brent Goose (Branta bernicla hrota) has its most important moulting site at Kilen (81°N). In the moulting period, the geese are unable to fly and are therefore extremely wary and should always be left undisturbed.
Several species of shorebirds inhabit the inland areas of North-East Greenland. Species like the Ruddy Turnstone (Arenaria interpres), Dunlin (Calidris alpina), RedKnot (C. canutus), Sanderling (C. alba), and occasionally Purple Sandpiper (C. maritima) are found in moist tundra areas, while the hiaticGreat Ringed Plover(Charadriusula) inhabits the drier areas. In small inland ponds, the Red Phalarope (Phalaropus fulicarius), King Eider (Somateria spectabilis), Long-tailed Duck(Clangula hyemalis), or Red-throated Diver (Gavia stellata) may have their nests.
Only few species of birds of prey are found in North-East Greenland. The Gyrfalcon (Falco rusticolus) breeds locally in scattered sites across most of the region, whereas the Snowy Owl (Nyctea scandiaca) and the Long-tailed Skua (Stercorarius longicaudus) appear only in years with high abundance of their main prey, the Collared Lemming (Dicrostonyx torquatus). 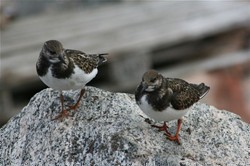 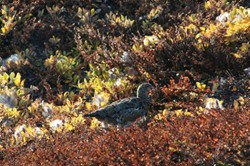 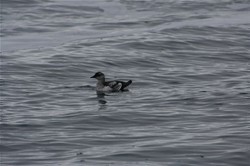 The coastal zone and seabirds

Compared with West Greenland, East Greenland holds smaller, dispersed seabird colonies. The Glaucous Gull (Larus hyperboreus) and the Arctic Tern (Sterna paradisaea) are common breeders, and colonies can be found even in the most northern parts of the area. The true Arctic gull species, Ivory Gull (Pagophila eburnea) and Sabine Gull (Larus sabini), are found more locally; the Ivory Gull nests on steep cliffs and the Sabine Gull is often associated with Arctic Tern colonies. Black-legged Kittiwake (Rissa tridactyla) and Fulmar (Fulmarus glacialis) also breed locally on steep cliffs along the coast. Common Eider (Somateria mollisima) can be found on small flat islands. East Greenland holds two major Brünnich Guillemot (Uria lomvia) colonies: at Kap Brewster on the south side of the mouth of Scoresby Sund, and on Raffles Ø just north of Liverpool Land. This is also the area where one of the most impressive small seabirds, the Little Auk (Alle alle), can be found in enormous numbers.
The Little Auk is the most numerous seabird in the Atlantic, and a key component of the marine and coastal ecosystem in this region. Little Auk are in the same family as the puffin. These small, tough birds (weighing approximately 160g) are highly colonial, breeding in vast colonies that can number up to several million pairs. They spend the winter out at sea, only coming to land to breed in the short Arctic summer. Little Auk females lay a single egg in nests in enclosed rock crevices in talus or boulder scree slopes, and colonies can be along the coast or on mountain slopes up to 30 km inland. The colonies are spectacular; a whirling activity of birds. Little Auks nest in aggregated sub-colonies, with highly synchronised patterns of colony arrival and departure. Mass synchronised flights over the breeding colony are a prominent feature of Little Auk breeding behavior. Birds in flight are often extremely vocal, with somewhat hysterical “trilling” calls that add to this intense spectacle of movement and activity. At other times flights are quiet, with smaller groups of birds circling the colony, silent except for the sound of their rushing wing beats. Little Auks feed on zooplankton, that they bring back to their chick at the colony in a throat pouch; they can carry up to 1500 prey items at a time! Little Auks play an important role in the arctic ecosystem by transporting large amounts of nutrients from the sea to the land. It has been estimated that birds at a single colony can add about 60 tons of nutrient-rich excrement per km2 of colony area. As a result, areas next to large Little Auk colonies support important concentrations of vegetation and attract many insects and herbivores. 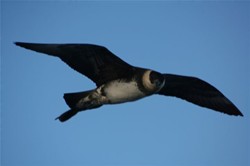 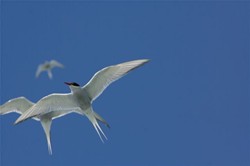 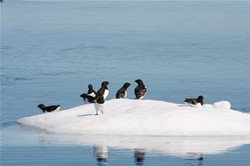